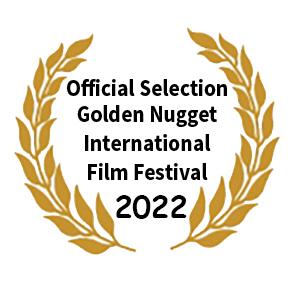 All selected entrants will be notified in 7 working days after the late deadline for each quarter. 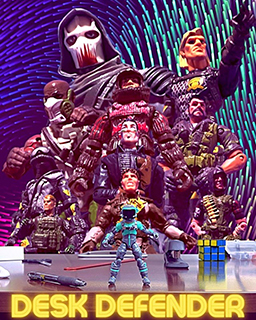 Overview: A lone action figure attempts to defend itself from ten enemies atop a cluttered office desk.

Director Statement: "I wanted to make a film that spoke volumes with no words. This allows the audience to perceive their own personal concept of what they have just experienced. My goal was to entertain the viewer with something they have never seen before, with items they see every day. I believe that this universal connection is an important aspect of film making as a whole. I saw the potential of a compelling story by fiddling with random office items on my desk three years ago, which inspired me to teach myself the skills required to bring my idea to life. Animating sequences overnight and editing in my dorm for days at a time motivated me to continue this production until its completion, no matter how long it took. Working on this project completely alone was an insightful experience that I hope will open opportunities for me to work with a team in the near future. I hope the audience has as much fun watching this short film as I had creating it." 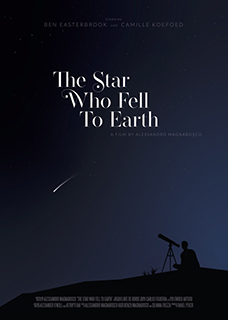 The Star Who Fell To Earth

Overview: When a lonely astronomer spots a shooting star and meets a strange woman who seems out of this world, will he finally make a friend or will loneliness be the only feeling he ever knows?

Director Statement: II am a London-based Italian filmmaker with interest and skills in screen writing, directing and editing. During the intensive two-year BA at MetFilm School, I wrote, directed and edited my own short films (Achilles' Prayer and The Star Who Fell To Earth), as well as developed my craft on several other student-led productions. No matter how, I’m here to tell stories.

Overview: Leonard Warren Borisoff, known professionally as Len Barry, was an American recording star, vocalist, songwriter, lyricist, record producer, author, and poet. In this documentary short, Len takes us through his musical journey as the lead singer of The Dovells and as a solo artist in the 1960s. 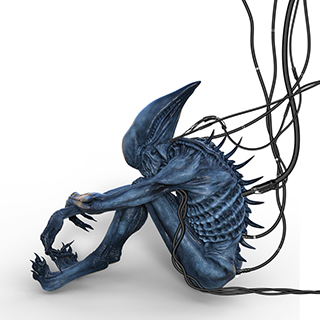 Overview: In his quest to become an Alpha male a young man buys an alien as a pet, a decision that quickly backfires in a humours and tragic fashion.

Director Statement: "I enjoy the challenge of writing in different formats and engaging with my readers and fellow writers." 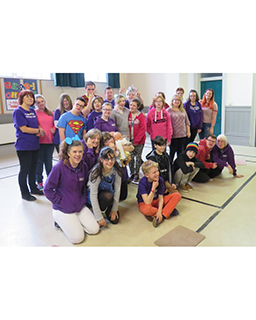 It's Ok to be Different

Overview: Centered on the young people and families of Drama Express, a UK award winning theatre group for young people with additional needs , “It’s OK to be Different” charts the evolution of an exuberant performance premiered at Cornwall's iconic Minack Theatre. Challenging perceptions of disability from lockdown to curtain up, the film is both an argument for acceptance and exploration of identity, giving an audience the inside track on the challenges, realities and joys of living with additional needs. Rooted in their experiences of living through Covid, the young people of Drama Express are determined to share their stories. The film is a testament to the drive and vitality of an extraordinary and inspirational group.

Director Statement: Everyone has a story to tell - and it's often people who perceive themselves as ordinary who have the most extraordinary stories of all. That's particularly true of the inspirational young people and volunteers of Drama Express and their families. In making documentaries, I endeavour to transport the viewer to the inside looking out, rather than as a bystander looking in. It's thanks to the openness and trust of the young people and their families at the centre of this film, and of all at Drama Express of course, that the viewer is treated to the privileged inside track of the challenges and joys of living with additional needs.

Overview: Sixteen-year-old Xezal lives in a small village in the Sinjar region of Iraq. An attack is organized on her village by the radical terrorist organization ISIS and many people are killed in the village. She witnessed another massacre during his exile journey with his family. Seven months after the massacre, another Kurdish woman, who was also captured, will help Xezal to escape from captivity. Xezal was raped by an ISIS emir and became pregnant. He is found by two young people when he is about to die of hunger and thirst on the mountain. Afterwards, not a single word comes out of Xezal's mouth, he is going through a severe trauma. Xezal is living the past over and over again with the sound of some objects in daily life. She remembers the cruelty she saw and the bad moments he experienced and disappears in the shadow of the past.

Director Statement: We proudly present our work to you by making art under difficult conditions in our geography, which has been captured by war and destruction. As Mesopotamian youth, we paid a heavy price for art. Despite the pressures and all the obstacles, we managed to complete our Project. 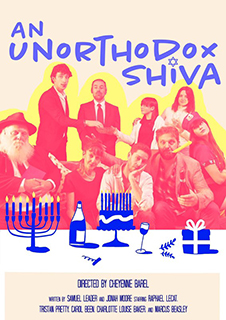 Overview: When his uncle dies the night of his 40th birthday people-pleaser and secular Jew Aaron gets steamrolled into holding the Shiva at his birthday party. He has to invite his conservative Jewish family into his unorthodox life, a recipe for disaster.

Director Statement: This project is very dear to me as it is a way to express my love for my culture despite not actively practicing my religion. I hope this film is a way for Jewish families around everywhere to connect and laugh at characters we've all grown up with in our environments. I also want to reintroduce the humorous side of our culture to the world, not just our traumatic past.

A Trip To The Dentist

Overview: Inspired by a real experience with a dodgy dentist. He approached holding the syringe, his "hands were shaking'.

Director Statement: It is a passion. I write, record, engineer, shoot, edit, build my own sets. I am not trying to climb aboard a commercial bandwagon, I prefer to cut my own groove. Be original, otherwise I feel life would be like living in a supermarket immitating the other best selling brands. There is no profit, everyone taking part does it for free and we have a blast as we continue to produce more videos. 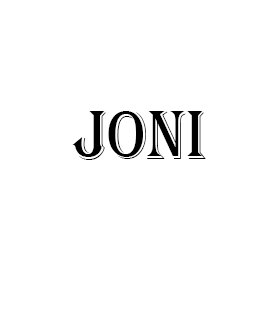 Overview: A group of friends are excited to open their new JONI, a playful android with no social skills. When the party hits her, she starts to act even stranger...

Director Biography: A trained actor and singer, Tara is excited to venture into film directing with her first short, JONI. After years of watching films, critiquing them, loving them, she finally has had the opportunity to make her own, and is grateful and excited to share her work with you.

Overview: Darcy and Manu are a young couple who live in Zone 6. They are ruled over by an authoritarian government whose solution to overpopulation is to exterminate the "undesirables", through a system known as the Dispatch Panel. Darcy's product quota at work has decreased because he comes home early to help Manu with her health condition. He is unsuccessful in his desperate attempts to get Manu medicine and she is worried that Darcy might get in trouble for helping her. Her worries are validated when Darcy is dragged off to trial at the Dispatch Panel. His sister volunteers as a character witness to save Darcy from execution, but she tells the panel of his wife’s condition to save him. The panel then decides that Manu will be executed instead of Darcy. His heart is broken. Upon his journey home he sees that the medicine Manu needs has been delivered by the Clerk. Darcy is overjoyed that his wife will be saved. But when he enters the house, he sees that Manu has succumbed to her illness.

Director Biography: Shreya Jha is an Indian filmmaker, born on 1st September 2001, in Delhi. She pursued her Bachelors in Filmmaking at the Nottingham Trent University, England (2019-2022). At the age of 16 she started working as a freelance photographer for small tourism brands and hotels. She then finished a 6 month course on camera operation and decided to join the filmmaking realm. She has played the role of a cinematographer in music videos for the record label Ninja Tunes (London) and also played various crew roles on student short films. She previously made short documentaries and travel videos on YouTube. Dispatch Panel is her debut short film as a director/filmmaker which is currently in the festival circuit. 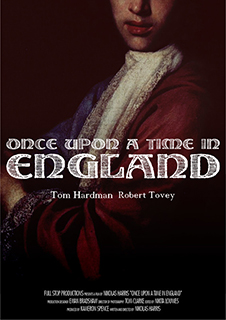 Once Upon a Time in England

Overview: A short thriller set in the late 18th century. 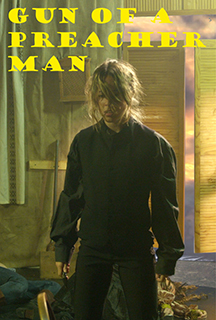 GUN OF A PREACHER MAN

Overview: On the cusp of a new century in a small frontier wild western town, various rival factions agree to meet for a sit down to carve up the ownership of the town. When the local Pastor intervenes a brutal fight ensues in which the rivals fight a battle royal to the death, only one faction will survive the encounter. An end-of-year school project with the second-year students of ISSA the International School of Screen Acting at Three Mills Studio, Bow, London, UK, this short was primarily created to show off their screen combat skills, with the bonus premise that it should look like an excerpt from a longer movie, but not a film as a whole. Short and entertaining also was a stipulation. 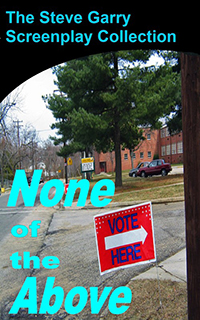 None of the Above

Overview: Campaign co-chairs who are falling in and out of love try to win the election for their own anything-but-cliché candidate while fighting off opponents who include a sensational sports star and an obscure neophyte.